Traditionally, pancit refers to “noodles” in Filipino cuisine, so I’m not entirely sure why this soup is called Pancit Molo since it doesn’t have any noodles. However, if you have any leftover wonton wrappers, slice those up into strips and throw them in the broth. Ta-da! Noodles!

Basically, if your Filipino grandmother made wonton soup, I imagine this is how it would taste.  I used my dear friend Jamie’s method of making chicken stock extra chicken-y and delicious without spending an entire day doing it – simmer bone-in chicken with store-bought chicken stock, seasonings and additional water for a couple hours. I don’t make chicken stock often, so when I need to do it, I double the recipe. It’s always nice to have (semi) homemade chicken stock on hand for soups and sauces.

No time for stock option: skip the extraly delicious broth part and just use a couple boxes of stock and go from there.

Vegetarian option:  use vegetable broth as a base, skip the fish sauce and replace the ground pork and shrimp in the dumpling with sauteed and chopped mushrooms.

These dumplings freeze VERY well. This recipe is enough to make about 50-60 total, so if you don’t plan on feeding 10 people at once, you’ll probably freeze the rest. Once you have them all folded, place in a single layer on a parchment-lined baking sheet and freeze until solid; it should only take a couple hours. Place in an airtight freezer bag and they’ll keep for a month. When you’re ready to enjoy, plop them in some boiling broth. Easy peasy leftover dinnertimes, especially if you doubled the stock recipe, then you already have it on hand!

Let’s start with the stock. In a large stockpot, add stock, bay leaves, garlic, onions, salt and pepper. Bring to a boil and add in chicken pieces. As the broth simmers, skim off any impurities that float to the top. Let simmer for about 2 hours. The chicken should be ridiculously tender. After a couple hours, remove the chicken and let cool enough to handle. Remove skin and bones and shred the chicken meat. Set aide.

While the broth is simmering, you can start on the dumplings. It took me about 30 minutes to fold 55. Finely chop the green onions, garlic, white onion and shrimp. Combine with the ground pork, sesame oil and salt and pepper.
PLEASE, take the time to fry up a little patty of the dumpling filling to check for seasoning. You CANNOT season the filling once it’s in the wrapper. Save yourself the “not enough salt and pepper” heartache. Totes worth the 2 minutes it takes and yay for a snack while cooking! Alternately, if folding dumplings isn’t your thing, you can create a little “purse” by sealing the edges together at the top of the dumpling. I prefer the folding version illustrated above – there’s less of a chance of the filling leaking. If you don’t plan on serving 10 people, you’ll have pleeeenty of dumplings leftover. They freeze great! Place on a parchment-lined baking sheet and freeze in a single layer, with no dumplings touching, until frozen solid – about 2 hours. Place in an airtight freezer bag and it’ll keep for a month.

Now, put all this hard, tedious work together! Patis gives the broth it’s distinct flavor. This is a Filipino fish sauce. If you can’t find it, use the fish sauce you can find. In a medium pot, add shredded chicken and 1 tbsp of patis. Saute for a few minutes. Ladle in broth, about 7-8 cups. It should be enough broth so the dumplings can simmer and be completely covered by liquid. Bring the stock to a boil. Once the stock is boiling, add in the dumplings. I don’t recommend dropping them in like this, because HOT SPLASHING LIQUID… but how awesome is this picture lol Cook for 6-8 minutes. Once they’re done, they’ll float up to the top. I serve it just like this – but feel free to serve over rice… it would probably even be good with quinoa! Garnish with additional green onion. I could probably eat a million of these… In a large stockpot, place chicken stock, bay leaves, diced onion, garlic, salt and whole peppercorns and bring to a boil. Add in chicken pieces and additional water (enough to cover the chicken, about 4 cups) and simmer over medium-low for 2 hours. Skim off any impurities that come to the surface. The broth should be rich in flavor, but not salty – the salt will come from the addition of fish sauce (patis) later.

Remove the chicken from the stock. Once cool enough to handle, remove skin and bones and shred chicken meat. Set aside.

In a medium bowl, combine the ground pork, minced shrimp, green onion, sesame oil, white onion, garlic, egg, salt and pepper.  Take the time to fry up a small patty of the mixture to check for seasoning – you can’t season once the filling is inside the wrapper. Do yourself a favor and try it out before you start filling the dumplings. Adjust seasonings as needed.

To fold the dumplings, place 1/2 tbsp of filling in the center of the wrapper. Wet the perimeter of the wrapper with your finger. Join opposite corners of the wrapper together to form a triangle. Carefully seal the edges together, making sure you’re pushing out any air bubbles around the filling. With the top of the triangle pointed away from you, fold the left and right sides over each other, using a little water to seal the edges. It should look like the dumpling is giving itself a nice, tight hug. Repeat.

In a medium or large pot, place shredded chicken and add 1 tbsp of fish sauce (patis) and saute over medium high heat for a couple of minutes. Add 7-8 cups of stock to the pot and bring to a boil. Add in dumplings, no more than about 15 at a time, and cook about 6-8 minutes. They’ll float to the top once they’re done. Cook in batches as needed.

Serve this as is, garnished with green onions and fried garlic, or serve over white rice for a more filling meal. 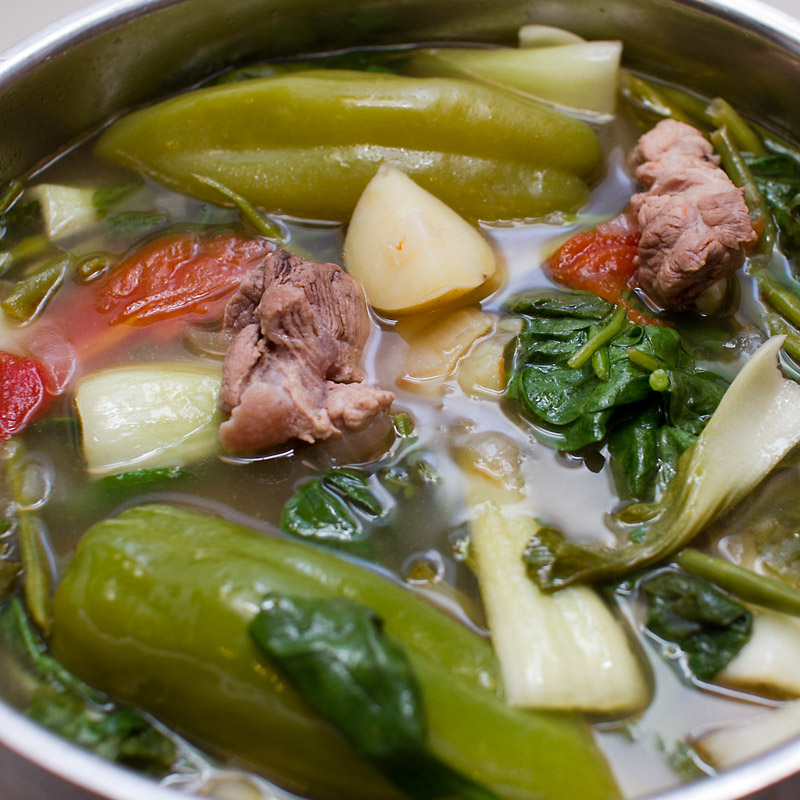